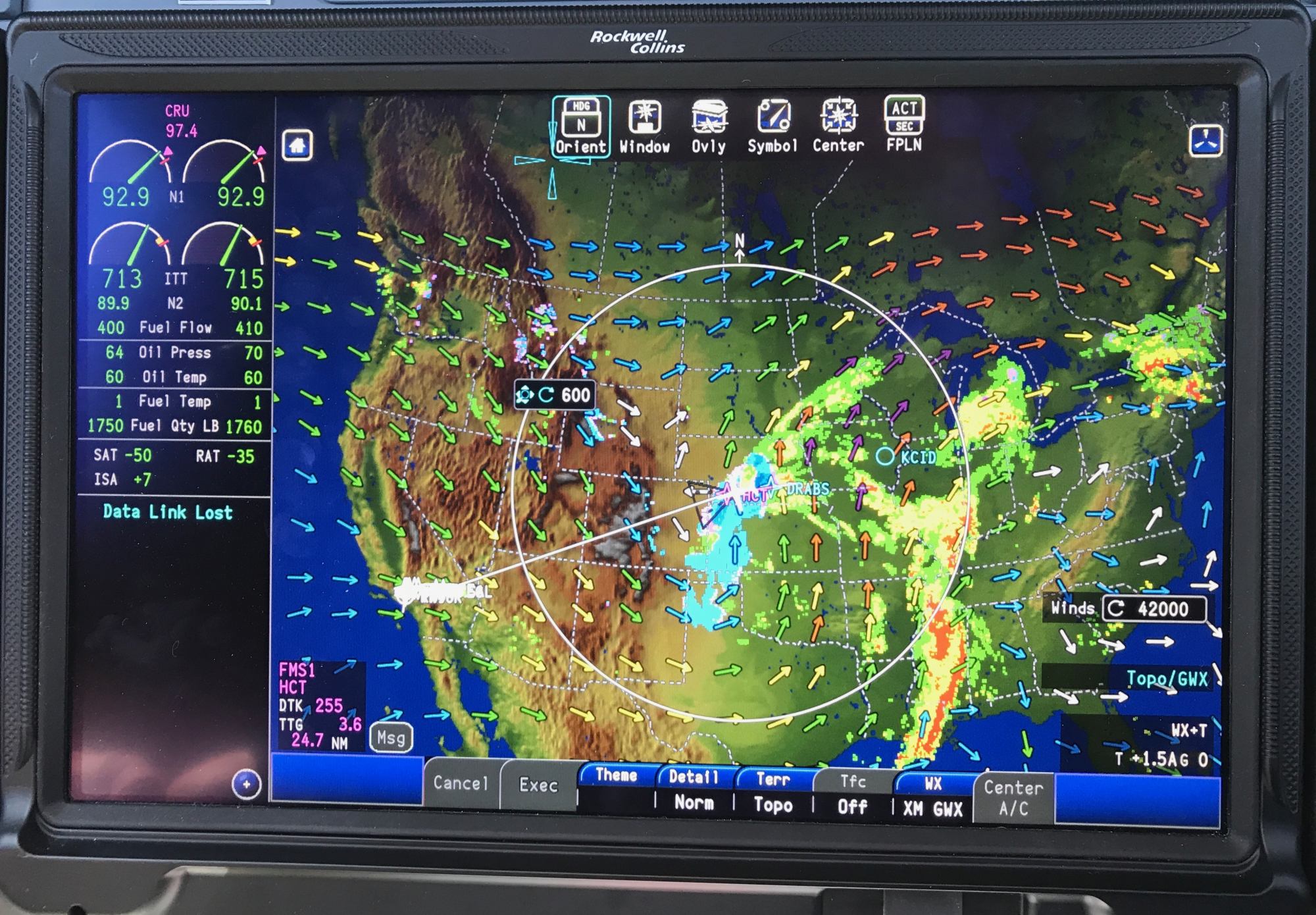 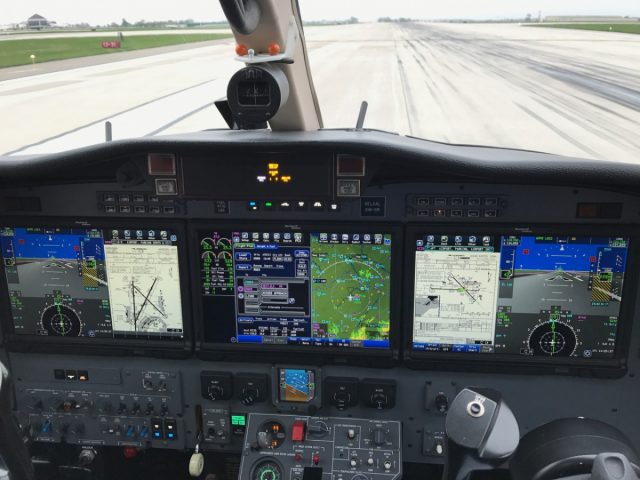 CJ3 Fusion Line Up and Wait

Note:  Due to the size of the photos, their resolution in the blog is scaled down.  To view higher resolution images, most photos link to higher res with a click.  This is a very long blog!  I tried to keep it short, however Pro Line Fusion is a very capable avionics suite and even at this length, I only barely touch the surface!

I had been looking forward to flying the CJ3 with Rockwell Collins’ new Pro Line Fusion avionics systems since the upgrade program was conceptualized 2 years ago. The CJ3 jets were originally outfitted with the Pro Line 21 avionics suite which is a extremely capable system, but as with all technology, didn’t match the full capabilities of newer aircraft avionics. Cessna has been delivering the CJ3+ with Garmin 3000 avionics since 2015 which offers the latest Garmin technology, but until Fusion was announced there were no advanced system upgrades for the CJ3, other than WAAS and other enhancements to the Pro Line 21. The Garmin 3000 is a great system, offering touch controllers, high resolution displays, and other enhancements over previous Garmin systems such as the G1000, which in itself was a transformative change when released.

Rockwell has been using the Fusion system in other platforms for a short time, and recently had installed them in the venerable Beechcraft King Air, which now offers them as a factory installed system. It was this system that Rockwell elected to customize for the Citation CJ3.

The Pro Line Fusion is unique in many ways, including the incorporation of touch screen technology in the PFD (Primary Flight Display) – a first for the aviation industry. While others have utilized touch controllers (G3000) or touch sensitive navigation displays (Garmin GTN series) this was a bold move by Rockwell to explore this technology.

I attended a brief system familiarization course at Textron’s Tru Simulation and Training Proflight center in a King Air 250 FTD (Flight Training Device). While helpful for basic familiarization,  nothing is like flying and teaching in the same aircraft model

The upgrade program engineering is extensive, and took over a year for Rockwell Collins and Duncan Aviation to design, install, fine-tune, fly, and obtain FAA approval for this system. A CJ3 owner graciously gave up use of his airplane for a year, so it could be used as a test bed. On Friday April 21, 2017, the FAA granted the approval STC to Rockwell Collins for the CJ3. It was only a few months later than anticipated, however it was worth the wait.

On April 26, Dave Lenz picked up his airplane at Cedar Rapids and made a few flights with Dale McPherson one of the Rockwell test pilots. After they landed it was now up to Dave and I to explore the aircraft. It was great to have the opportunity to teach, and fly, the first CJ3 with Fusion. Our first flight was short – Cedar Rapids IA (CID) to Madison WI (MSN).

It was helpful to have read the 838 pages of the Fusion Operating and Installation Manuals prior to the flight, but trying to remember everything was a challenge and clearly wasn’t possible. Rockwell Collins has a few YouTube videos explaining some of the basic functions which are helpful. While it is clearly a different technology architecture, previous experience with Pro Line 21 provided the basis for many of the FMS (Flight Management System) features, outside of that is is vastly different.

After 40 hours with the Rockwell Pro Line Fusion installation, I’m still learning about all of its capabilities.  My intent with this review to offer you a glimpse into this powerful suite, not to cover every aspect of its operation.  My goal is to constantly update this blog as I teach, and fly the CJ3 over the next several months.

The Fusion system is comprised of 3 Adaptive Flight Displays (AFD). Rockwell Collins also names them Display Units (DU), in case you get confused like I do sometimes. Each AFD (DU) can serve as an MFD (Multi-Function Display) or a Primary Flight Display (PFD), depending upon configuration. This also is useful when an individual display is not functioning, the other displays can show the information from the inoperative display. 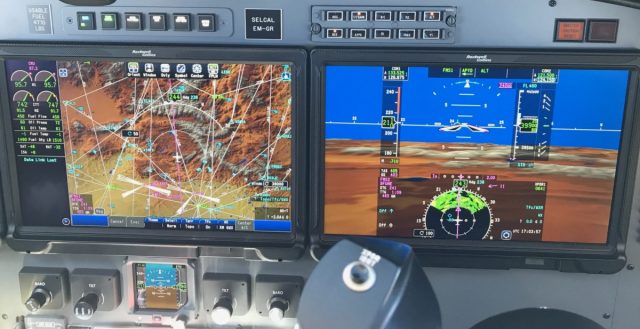 All of the data is entered on the AFDs, either by utilizing touch on the displays themselves, or through actions using the Cursor Control Panels (CCP) and Multi-Function Keyboard Panel (MKP).  These multiple methods of entry are one of the most powerful features of Fusion.

The CCPs (one for each pilot) and the MKP (which pilots share) are located on the center pedestal.  This is the same location that previously housed the FMS display and Keyboard for the Pro Line 21.  The location of these controls is a natural reach for both pilots and enables the pilots to use either these controls, the touch screens directly, or both in conjunction for screen navigation and entry.  The most optimal method for me is to first touch the AFD field I want, then use the CCP and MKP to do my data entry.  As you can see in the photos, the autopilot CRS, ALT, and HDG controls have moved to the top of the pedestal, still in easy reach. 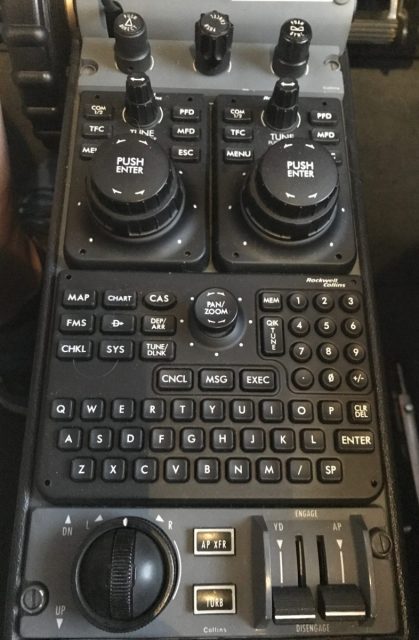 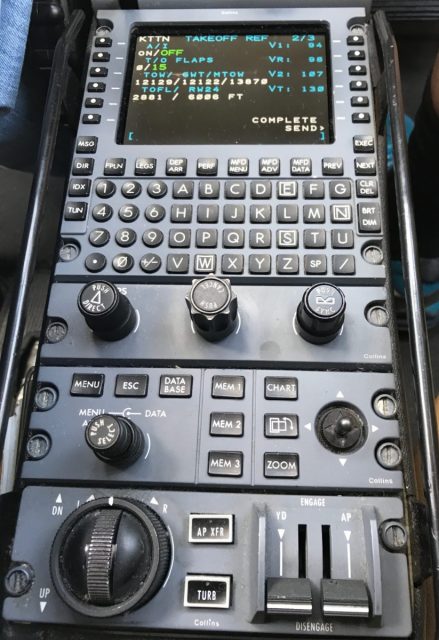 The CCPs have several functions that can mimic, or enhance, touch functions on the AFDs. The controller (RC terms this a Multifunction Knob) serves as a joystick for movement on the AFDs, selection of fields for data entry, and select list data – hence the name.

The Multifunction Keyboard Panel (MKP) is extremely powerful.  In addition to the keyboard – which is now  in QWERTY format, the MKP contains a number of quick access function keys, and joystick.  Pro Line 21 pilots will see  familiar keys such as CHART, however many are new.

Unique to  aviation is the incorporation of certified touch-enabled PFDs that are a key component of the Pro Line Fusion.  While some avionics manufacturers may also offer touch screen MFDs, the Fusion system offers some unique capabilities.  Since only portions of the PFD are enabled for touch, you may forget which ones.  It is simple to find out, just touch the screen on the side and the ‘hot spots’ appear on the PFD to show you the active regions. 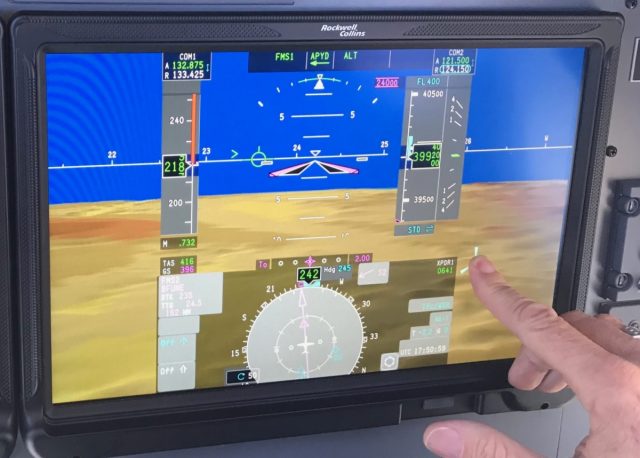 On to the Flying

Now that I’ve given you a brief introduction to the architecture, it is time to pre-flight the system and fly!

One of the first steps is to check the status of the system (Databases, GNSS, Position, etc), initialize our weight and fuel, calculate performance parameters, and load a flight plan. 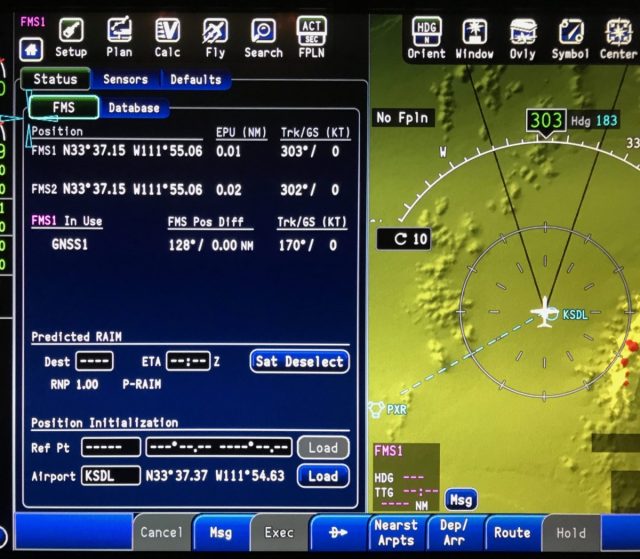 The Pro Line series excels at flight plan data entry, and the Pro Line Fusion is no exception.  As mentioned, you can load flight plans using either Plan or Fly pages – however only Plan will support Airway inclusion directly.  Once the Airways are loaded, you can see the full waypoint detail in Fly, and of course modify as needed.

Departure and arrival procedures, including approaches, are loaded into the flight plan using the Dep/Arr button  The photo below show a curved departure, GROMO 4, on a recent flight from Yakima Washington (KYKM).  While initially the departure looks somewhat complex, the Fusion system makes it simple.  Since it is an RNAV departure, the Flight Director and Auto Pilot greatly facilities flying it, and it was fun flying the arc. 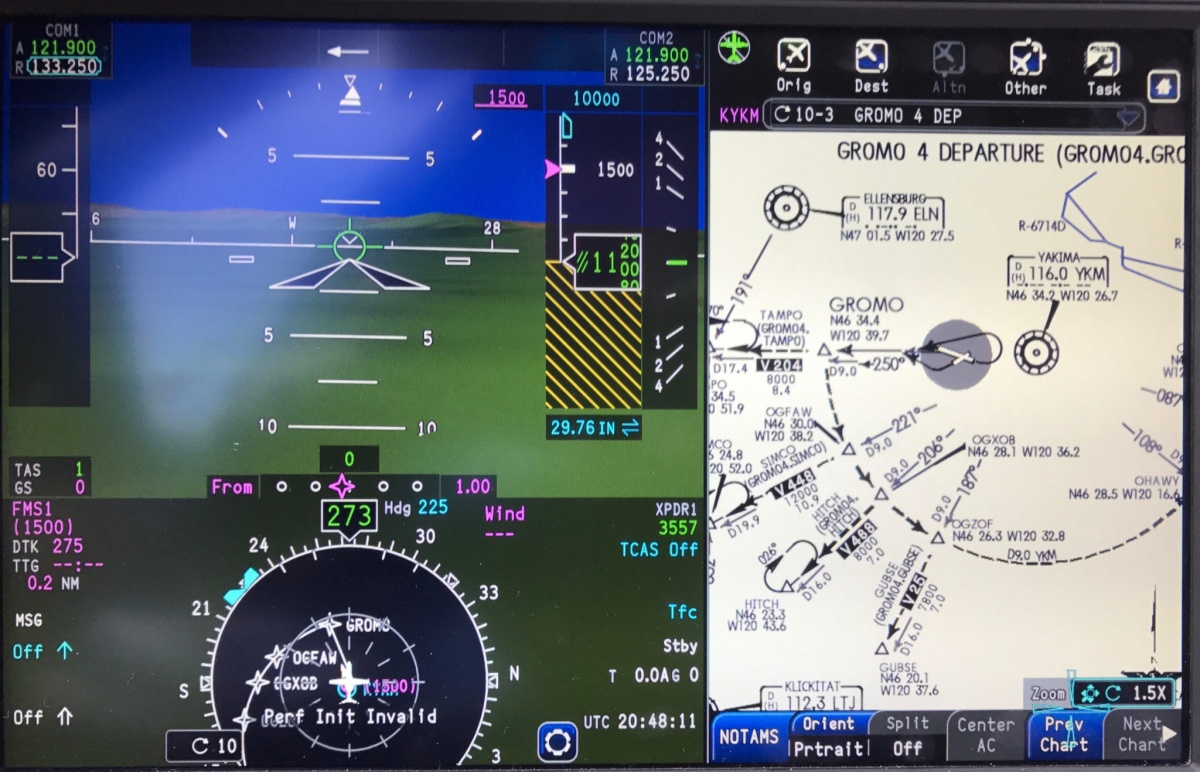 One advantage of a long cross county with Pro Line Fusion, is you get a chance to explore all of the display options and features!  Sometimes it is even more important to just look outside and appreciate the unique opportunity to pilot such aircraft at 45,000 feet.

Entering Crossing Restrictions (e.g.  10 miles east of JLI at 10000) is easy with Pro Line 21 and Fusion offers even additional methods.  Here are some  of techniques to enter the data. 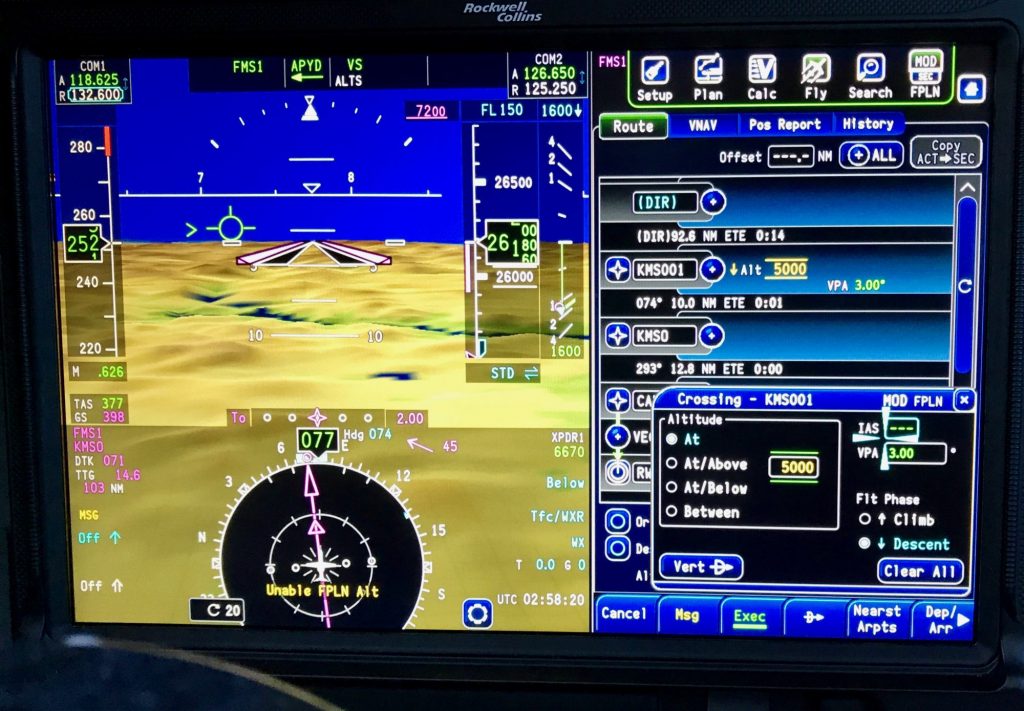 Crossing Restriction before a way point – Second step is to select condition (e.g. AT), altitude (5000), IAS (if applicable). One easy method is simply to touch the empty field to the right of the new waypoint KMSO001 and the Crossing Dialog appears.

As with so many other features of Pro Line Fusion, there are a large number of methods to select an approach or arrival at an airport.  As shown above for the departure, you can select the Dep/Arr button on the Plan or Fly pages.

Perhaps a very unique method is to access arrivals by selecting the ‘feathers’ on the runway approaches depicted on the MFD at the airport icon.  As you can see by the MFD photo below, there are ‘feathers’ that depict instrument approaches to runways.  Rockwell Collins has displayed the feathers using the orientation of the runways – a great way to spatial orient a pilot to the airport.  While we have always been taught to visualize the runways at an airport, this method is far superior to guide the pilot.  With Fusion, you can simply touch one of the arrows and the available approaches appear on a pop-up dialog box.  I found it very useful when evaluating alternative airports along the route, or when I simply wanted to pick an approach at an airport. 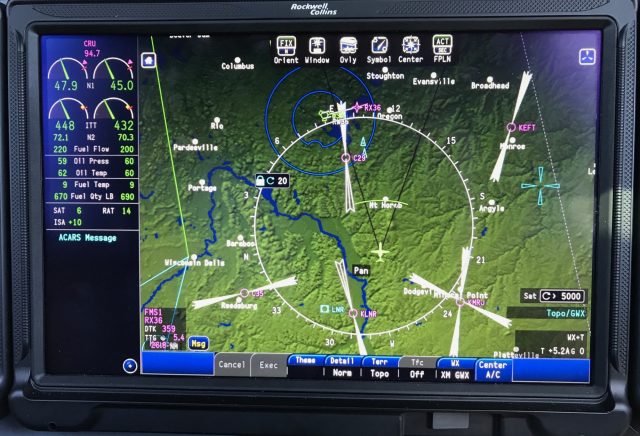 Selecting Arrivals by touching the airport on the MFD – KCOS.

One of the coolest features of Pro Line Fusion is the outstanding number of weather display options.  In addition to onboard Radar, XM/Sirius Weather, you can also add the optional Datalink Request system for weather.  I’m only describing the tip of the iceberg, if you can forgive the weather pun!  Fusion provides an amazing number of display options, and you can only begin to explore them all over several cross country flights.

The pilot can display weather on any one of the AFDs, either as an overlay on the MAP, or a dedicated Weather window to display graphical or text weather.  While the Pro Line 21 suite offered a robust list of weather options for display on the MFD, usually be accessing the menu through one of the MEM keys, the Fusion pilot must configure their display.  As noted earlier, this would be a great use of one of the Display Memory keys – perhaps User A or User B.

I don’t know if there is a conclusion! After spending a lot of time with Pro Line Fusion, taking 1400 photographs of the system, and a large number of hours writing, I could still spend more time exploring its capabilities.  A pilot familiar with Pro Line 21 can learn the system in a few days and operate the system proficiently, however they will only discover its full power over time, similar to some of the more advanced avionics now available to pilots.

Pro Line Fusion is definitely an significant jump in capability over Pro Line 21.  I still enjoy flying the later system, however the Fusion system is definitely worth evaluating this upgrade path.  For those CJ3 Pro Line 21 operators anticipating adding WAAS and ADS-B out to their existing aircraft, upgrading to Fusion at an approximate cost of $325,000 which includes those functions is worth evaluating.

I worked on the software for the first HUD for Flight Dynamics, later to be purchased by Rockwell Collins.  I would love to see that system integrated into Fusion.

While I enjoy using Fusion, there are still some issues that Rockwell Collins will need to resolve, such as Vspeeds, Performance, ADS-B in, and some usability changes.  Of course, I’m very particular and I can always find ways to improve aircraft systems!

For Pro Line Fusion training in the CJ3 – contact Rich Pickett at rich@PersonalWings.com