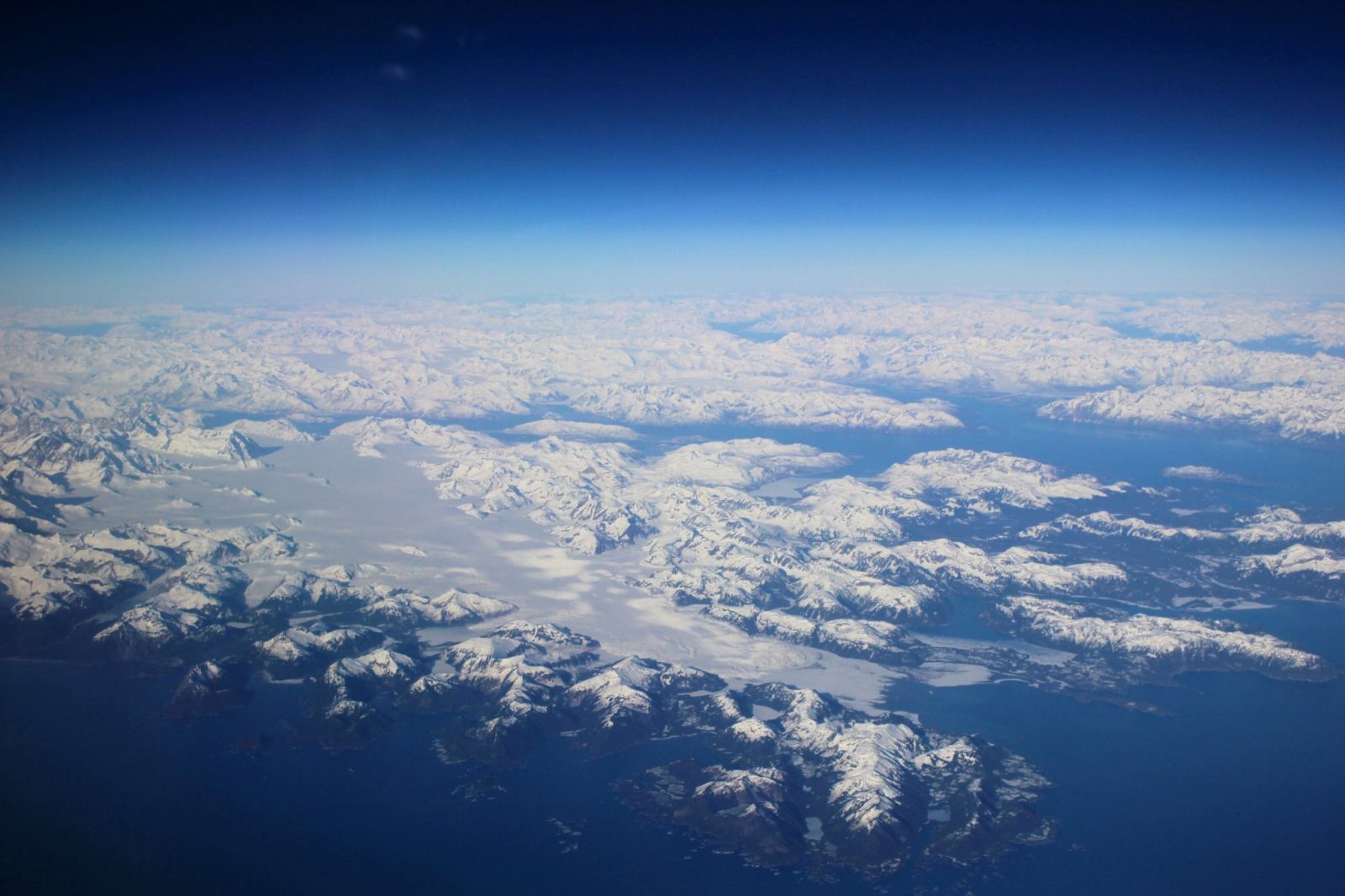 In March 2014, I had an opportunity to visit Alaska for my aviation consulting with a friend in a Citation CJ3.  Flying up to Alaska offers some of the most stunning scenery I’ve seen.  Our departure point for the last leg to Anchorage was Hillsboro (HIO).  Flying up the coast in the Citation CJ3, rather than the slightly shorter direct course over the ocean, offered spectacular views with virtually unlimited visibility.  Having previously lived in the Northwest, I always enjoyed flying by the mountains, especially Mt. Rainier, Mt. St. Helens, and Mt. Hood, today was no exception.  I remember flying low over Mt. St. Helens a year after it exploded, with the largest landslide ever recorded.  Today it looked peaceful, covered in snow.

As  we climbed to 43,000 feet MSL (FL430) the dark blue sky above the horizon was breathtaking, and we could  see the curvature of our planet. 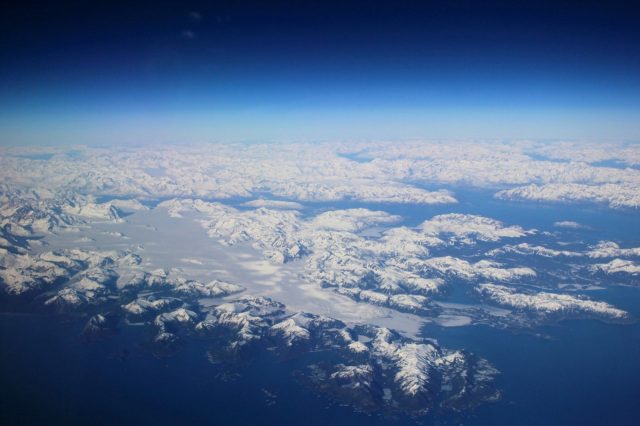 Along the British Columbia Coast at FL430

The number of glaciers were too many to count as we flew up the coast.  One of the largest along the route is the Malaspina Glacier which is fed by the Seward Glacier north of Yakutat Alaska. 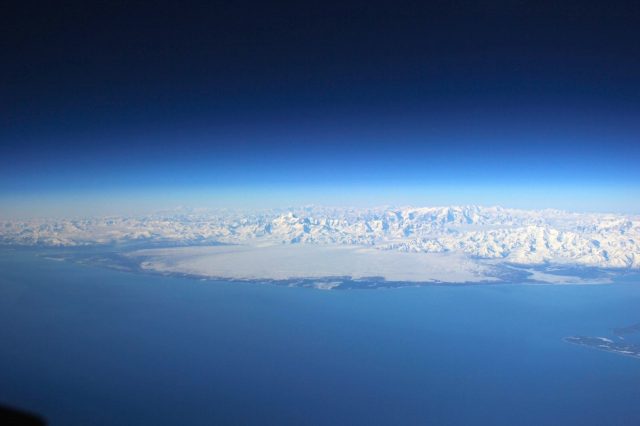 As we got closer to Malaspina, we could see the detail of the leading edge of the glacier as it moves into the ocean, including the ice field in the water. 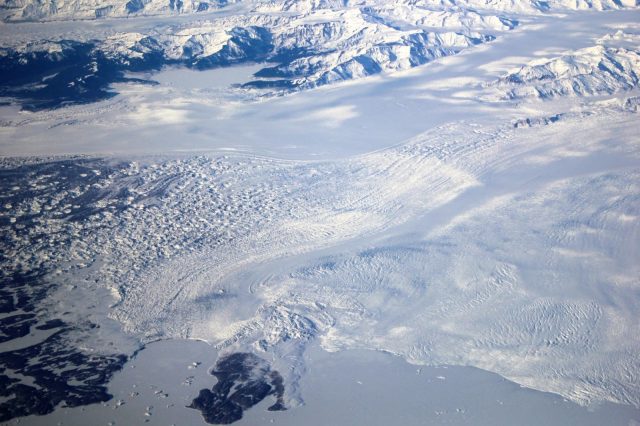 Flying into Anchorage, we encountered low clouds for the first time on our flight.  The clouds are frequently caused in this area when the cold moisture from the sound move over the warmer land and condenses.  In this photo, in the distance you can see the Sleeping Lady – Mt. Susitna. 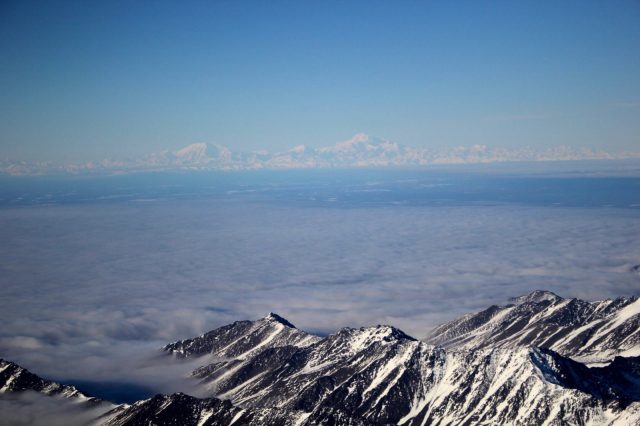 Flying into Anchorage – Sleeping Lady (Mt. Susitna) in the background

With all of mountains in Alaska, I was hoping for some good skiing.  The only ski area near Anchorage is Alyeska, a relatively small ski resort.  The runs, except at the top which was closed, are narrow and were very icy (the marketing term is ‘firm’) from the recent weather.  After a few runs, and great views, I decided I’d rather be flying! 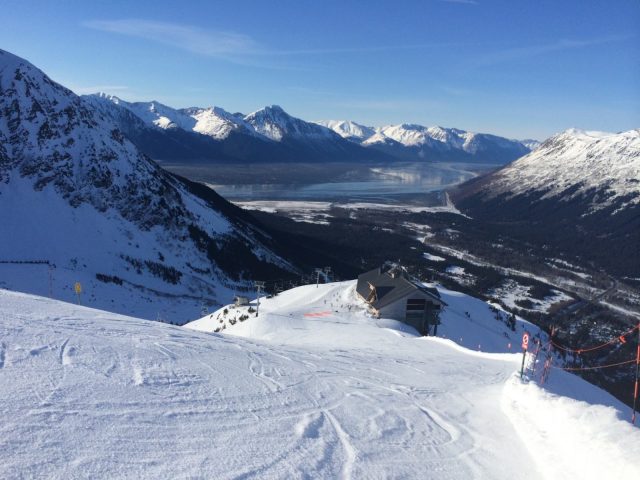 After flying up to Alaska in the CJ3, I wanted to explore the area at a lower level, and speed.  Despite having an extremely large number of aircraft based in Alaska, there are very few opportunities for aircraft rental. In Anchorage, I found Land and Sea Aviation located at Merrill Field (PAMR).  Anchorage has a number of airports in addition to the primary airport (PANC), including the largest seaplane base in the world – Lake Hood which is adjacent to PANC,  and military fields, all within close proximity.  This arrangement requires special consideration when flying, and a specific FAR – 93.  The Airport Facility Directory (AFD) contains specific instructions for departure and arrival routes for each airport.  If you want to view the airport weather in real time, the FAA also has a great network of airport cameras throughout Alaska that provide a useful way to check local conditions – FAA Airport Cams

One of the best ways to explore Alaska by air is by taildragger, especially since I miss flying on snow runways and gravel strips.  Land and Sea had a plane to fill my need, a Citabria! For my checkout, I met Tracy Kraun, a great CFI with loads of taildragger experience.  At a cruise speed of 90 KIAS – and fun to fly, it fit my needs!

Equipped with the most advanced avionics 🙂 we were ready to taxi for departure. 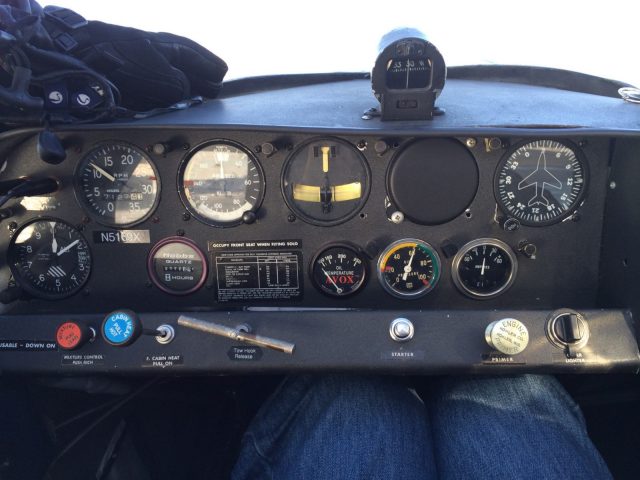 Citabria Glass Panel – at least glass lenses on the instruments!

The views down low are as spectacular as from 43,000 feet.  Departing to the northeast we could see the White Mountains on our right, on our flight up to Willow AK (PAUO) airport to practice landings. 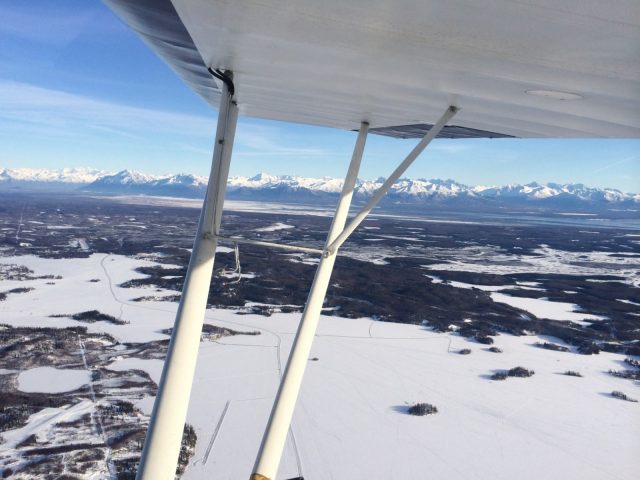 White Mountains in the Background

I picked Willow airport, since it is next to Willow Lake, the actual start of the Iditarod Dog Sled Race that was starting the next day.  The airport traffic area was filled with volunteers – Iditarod Air Force – who help shuttle supplies and people for the race.  It was great doing wheel and three-point landings with so many taildragger airplanes, and helicopters, in the pattern.  Landing on the snow has always been one of my favorites, it keeps you on your toes (and heels since the Citabria has heel brakes).  It was fun getting familiar with the Citabria with such breathtaking scenery. 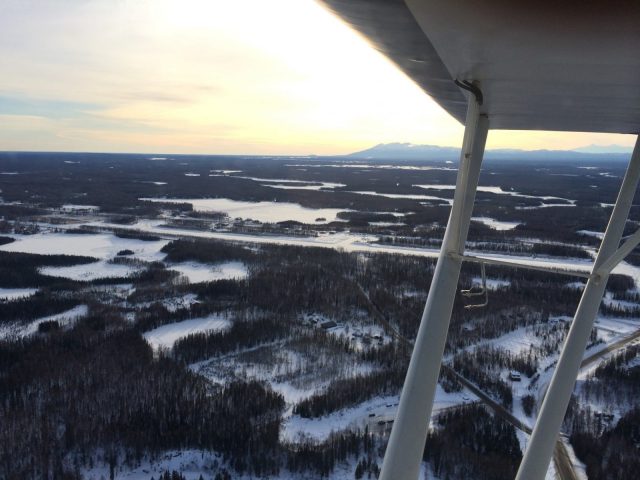 After a number of patterns, it was off to Goose Bay (Z40) to practice on a gravel strip.  I’m closing in on having flown into nearly 700 airports, and what better way to add an airport than Good Bay.  On the way we were able to view the reflection of the White Mountains in the water. 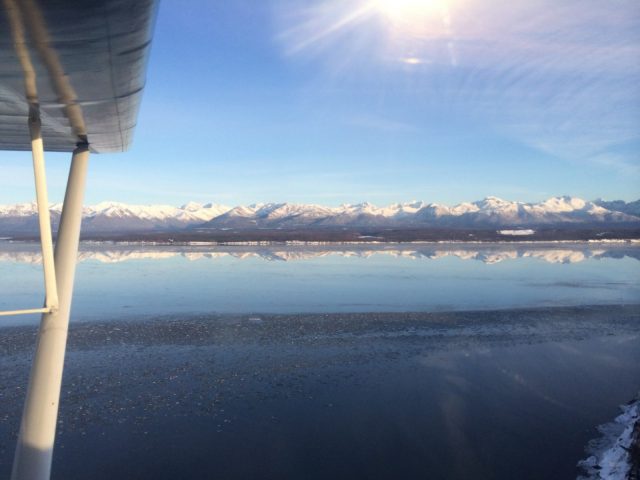 Goose Bay is adjacent to the Sound, with a small cliff on one end.  The water in the Sound is very cold, hence the ice seen in the foreground.  Flying over such cold water was a great incentive to remember carburetor heat, and pay attention to the landing!  The gravel is in very good condition, and the State does a great job of clearing the runway since it is used so often. Our next stop was back to Merrill Field. 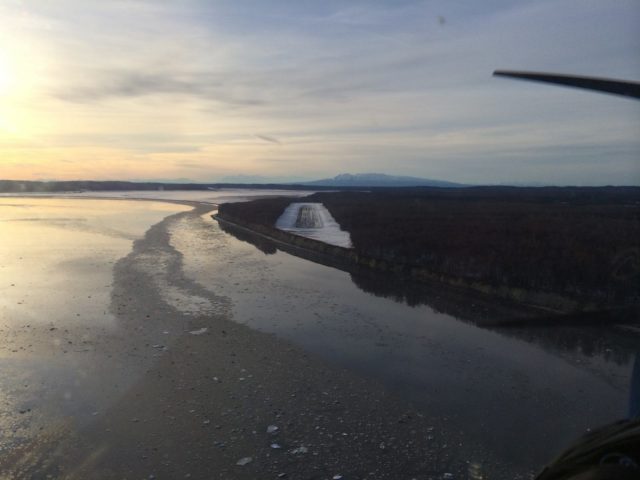 What a great way to experience Alaska!

We were planning of flying up to Willow to watch the start of the race on Sunday March 2nd.  During pre-flight the tail wheel was flat – so 2 hours later, in a car, I was at Willow Lake.  If you haven’t seen the Iditarod, it is well worth the visit alone.   At the start there were many countries represented, with mushers of both genders, all starting on an amazing race of 1049 miles with incredible teams of dogs! 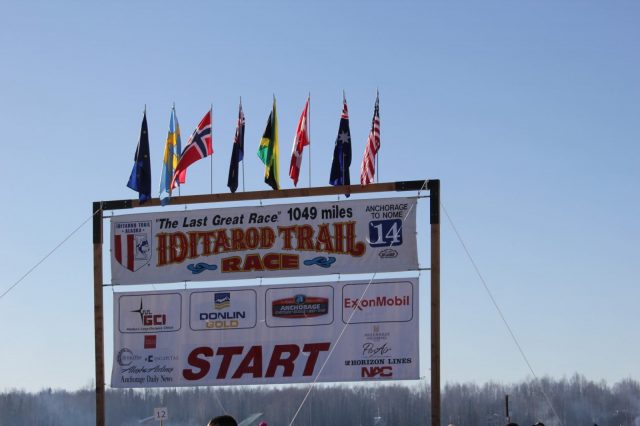 The start is a party of its own.  People bring ice-tents, BBQs, and  you name it to watch the start of the race.  There is Caribou sausage and other fare you only see in the north! The temperature was a balmy 30 F, which is too warm for the dogs who perform better in 0 F and below. Each team uses a group of musher handlers just to keep the dogs organized and happy.  The dogs are so excited, they were jumping and ready to start this grueling race. 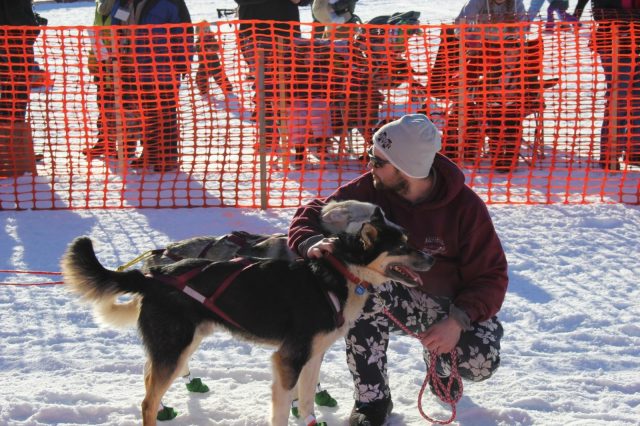 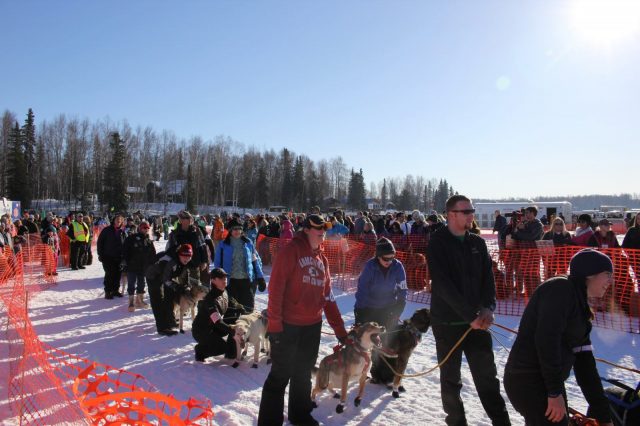 When released by the starter – the dogs literally leap ahed on their way to run the equivalent of run 40 Marathons! 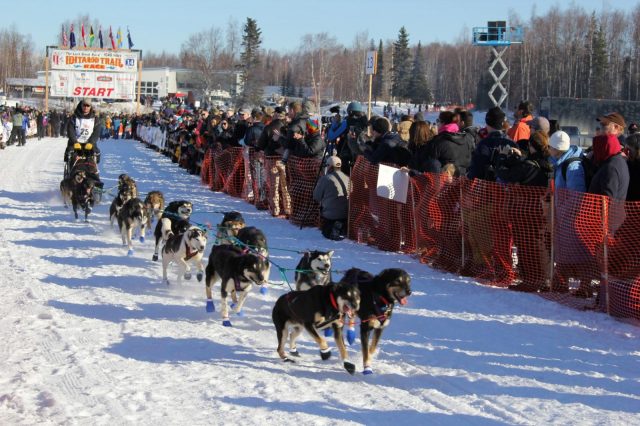 Dogs Starting Their Run for 1049 miles

I flew to Fairbanks (PAFA) to conduct some work for an airborne climate monitoring research project on behalf of  SDSU.  While at the Fairbanks airport, I found a location where I could rent a Cessna 172 for a quick low level flight around the area, before heading back to Anchorage.  As with Anchorage, there are many aircraft at Fairbanks but few places to rent.  I found a small, and well maintained, fleet at Warbelows Flight School which is owned by Andrew Warbelow.  I asked Shane Jones, one of their CFIs, to join me on a checkout flight in one of their C172s. They know how to keep the planes flying, right down to -30 F.  Each one of their tie down spots has an electric outlet for engine and cockpit heaters, as well as access to a large pre-heater.  It was great starting a warm airplane, with a comfortable interior! 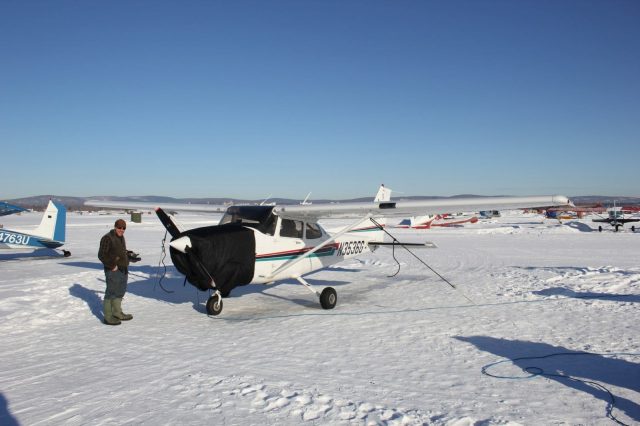 Getting Ready to Fly with Shane  at PAFA

The area around Fairbanks has some interesting features.  The airport itself keeps one runway snow-covered for use by ski-planes!  Just outside of town is the Fort Know gold pit mine.  The dust from the mine even has a gold hue! 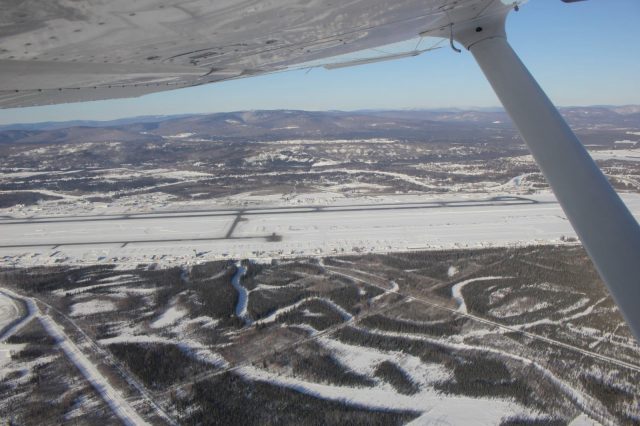 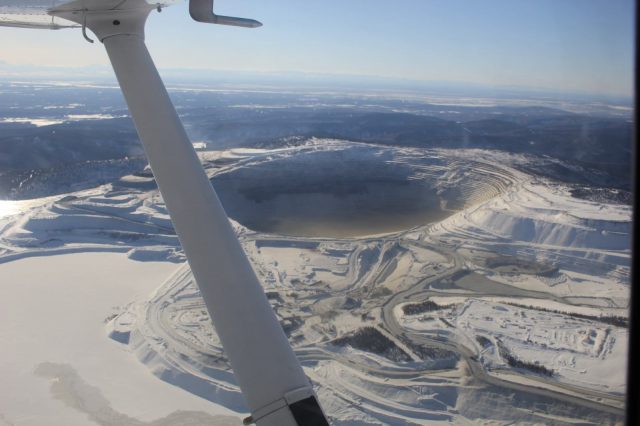 On the way back to Anchorage, the view of Denali was truly spectacular.  With a peak height of over 20,000 feet the mountain looms over the geography with glaciers emanating in various directions. 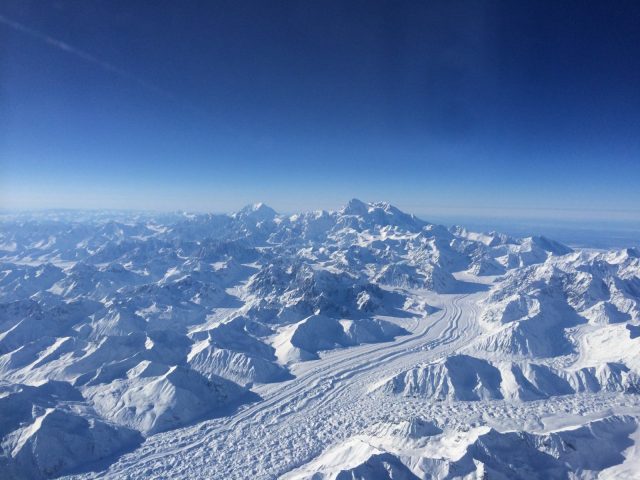 If you get the change, I highly recommend exploring Alaska.  Whether you fly your own airplane to our northernmost State, charter a flight, or rent a plane to fly in Alaska, you will be rewarded with an amazing experience.

The flight back to San Diego was enjoyable, watching the sun set over the Pacific. Over northern California we encountered a spectacular light show.  I was flying the CJ3 at FL450 and we could see numerous lightning strikes – below us!  The high altitude capabilities of the CJ3 allowed us to safely fly above the storms, avoiding changing our flight path.

CJ3 Lightning – Flight back from Alaska at FL450. The strikes were from the storm below.