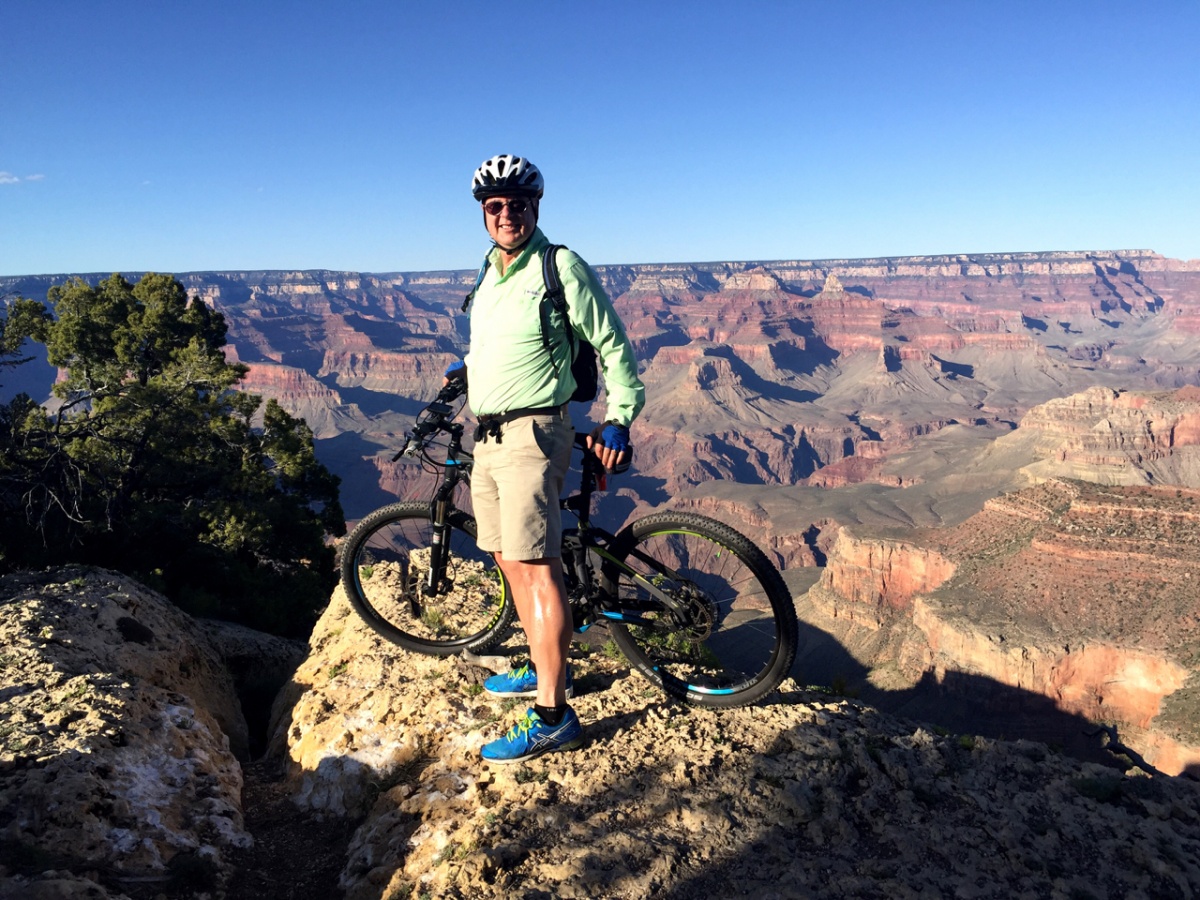 Four weeks after breaking my ribs while mountain biking in Sedona , I was back on the bike in the Grand Canyon National Park in Arizona. Biking the South Rim of the Grand Canyon is quite different than Sedona. While Sedona prides itself on a wide variety of amazing technical trails – very few if any are at the novice level, the riding at the Grand Canyon NP is restricted to the fire roads, trails, and paved roads. The North Rim offers more challenging trails in a fairly remote area in the Kaibab National Forest, in particular the Rainbow Ridge Trail.  Each one different, with their own amazing qualities.

I flew to Grand Canyon  (KGCN) airport from my home base in San Diego (KMYF – Montgomery) in our Cirrus SR22. 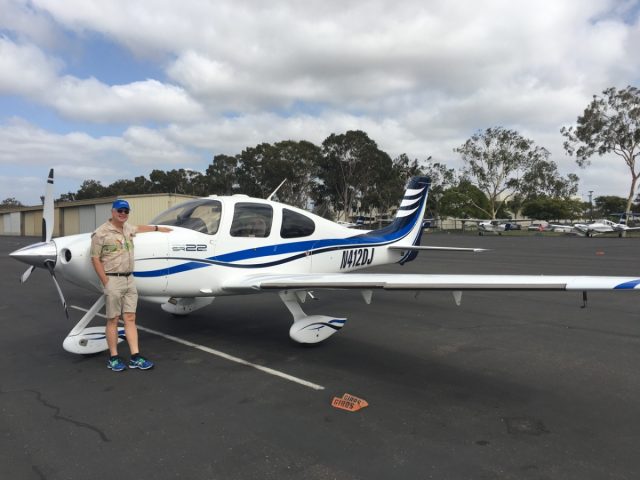 The enroute weather was perfect VFR, virtually clear skies with unlimited visibility of at least 100 miles.  Only an occasional bump, interrupted the beautiful flight at 9500 Ft MSL. 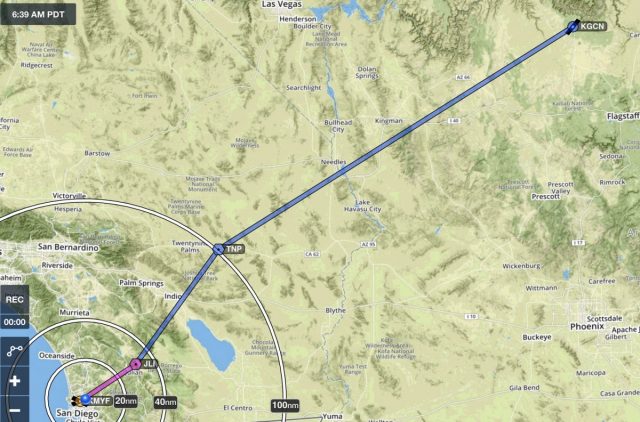 Using Air Traffic Control (ATC) Flight Following, it was a direct flight taking only 2 hours to arrive at KGCN.  The Grand Canyon airport is just outside of the Grand Canyon Special Flight Rules area, which restricts flights over the canyon itself. 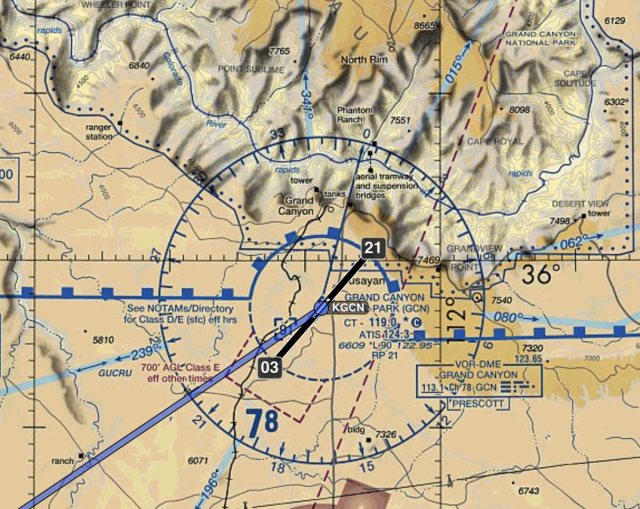 We were greeted by a very helpful control tower staff as well as Dominique the lineman with Grand Canyon Airlines, the fuel concession as well as the charter operation at the airport. Ten minutes after landing, it was time to ride! 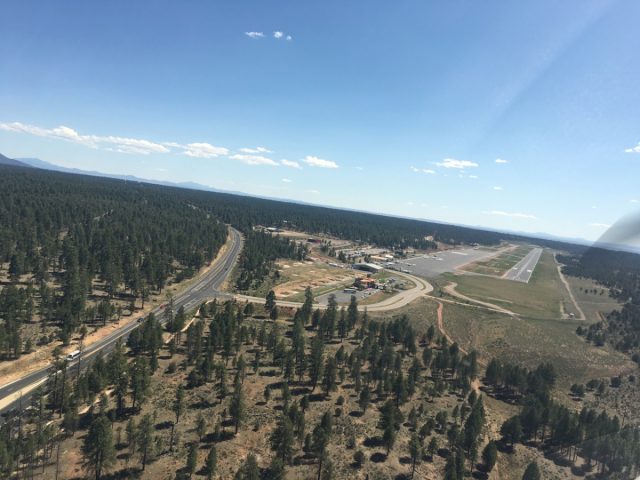 From the Airport to the Rim

While the Sedona airport is on a Mesa, GCN is on a small hill just south of Tusayan, about 3 miles from the entrance of Grand Canyon National Park, and another 5 miles to the Visitor Center on the South Rim. The airport is at 6677 ft MSL, while the Visitor Center is at an elevation of 6860 ft which makes for a great climb!

Just north of the airport is a small shopping and services area, with some great places to eat and shop.  The shortest route to the South Rim is riding the highway, US-180 S, sharing the road with the busy traffic.  Some local folks suggested using the Greenway Trail. While slightly longer, it is a great alternative and a very scenic route.

The trail is in great shape with gradual rise towards the rim. It has both gravel (60%) and paved sections and meanders through pine forest just west of the highway. 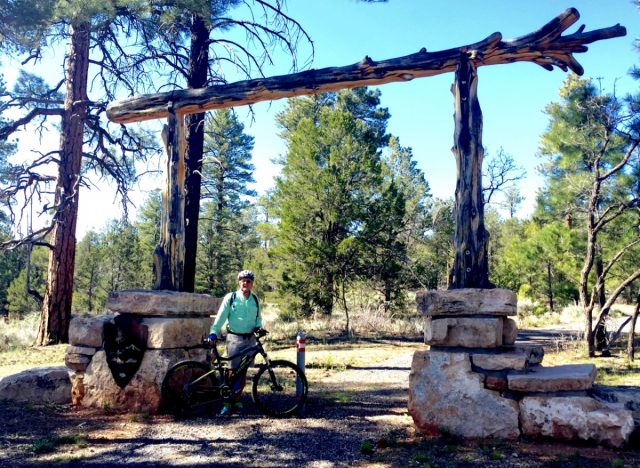 After about 7 miles of trails, we ended up at the Visitor Center complex, of course as we were riding we had furry friends to see. At first I thought they were horses, due to their size, then realized they were some of the largest deer I’ve ever encountered. 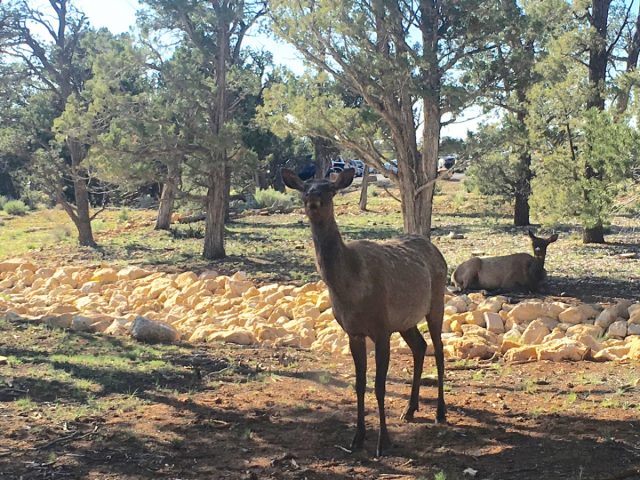 We stopped by and visited the hospitable folks at Bright Angel Bikes, a great place to rent bikes on the South Rim. They helped with some minor adjustments and I offered them the chance to ride my E-mountain bike. I think they were spoiled.

With limited time, this trip, we decided to head west towards Hopi Point and Hermits Rest. It was a path with initial downhill ride , i.e. tough coming back, then moderately challenging 6 percent climbs. You share the road with shuttle buses, and it is somewhat narrow with no shoulder to speak of. You get very friendly with the shuttles since they can’t move into the opposing lane!

The climb is well worth it. There are a number of scenic stops along the way, offering majestic views of the rim and canyon.

We were riding with the setting sun, so the sun rays on the canyon wall were spectacular. 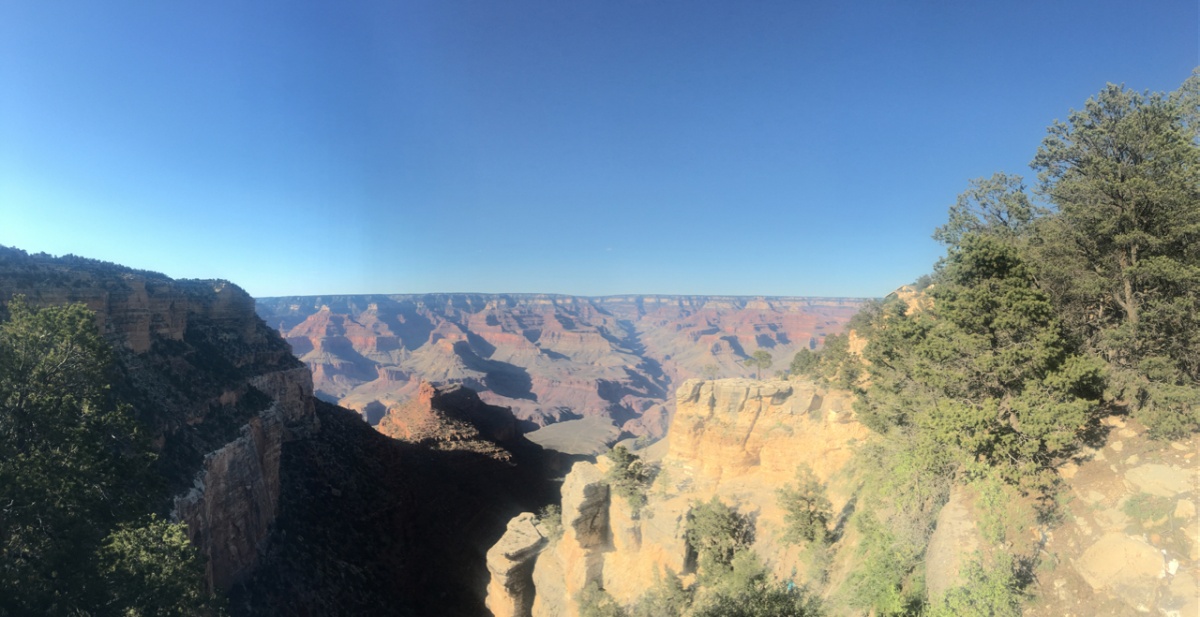 Setting sun on the canyon walls

On the South Rim, this is also the top terminus for the walking trail to the canyon bottom.  This photo  shows one of the trails down into the canyon from the rim. 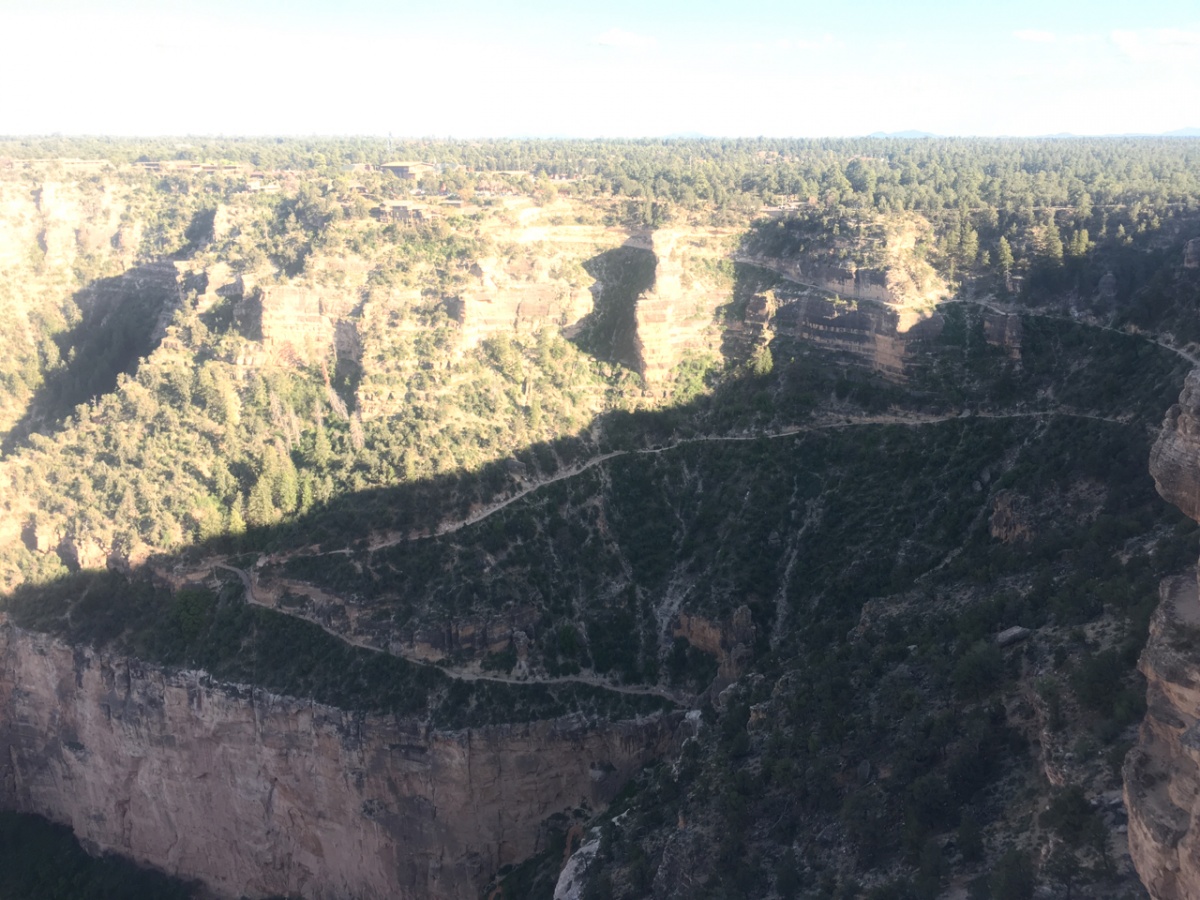 Continuing up to the far viewpoint, we were the only bicyclists climbing the scenic route. Every stop offered another incredible view,

Step back just one more step – for the photo!

Race to the Airport

Just before reaching the last view point, we decided to call the FBO in case we didn’t make it back before they closed. It was an excellent idea, since we learned the entire airport was closing that night at 7pm due to all airports lights being inoperative. Our choices were to either change plans and stay the night somewhere, or speed back to the airport. We only had an hour to get back, load the bikes, and takeoff.

Our calculations indicated we would barely make it in time. We raced down the rim, climbing up some of the great downhills runs. While I hadn’t used the electric assist much on the ride up, it came in handy also enabling me to push my biking colleague up some of the steepest hills.

This time we returned along the highway, 64, which has only a one foot shoulder on a large portion of the road. Most of the motorists were gracious and tried to give us some room, and the truckers were professional. Only a few drivers were clueless how to share the roadway with cyclists.

We arrived at the airport with 15 minutes to spare – now to preflight the plane, load the bikes and take off. The tower was scheduled to close at 7, but for some reason they shutdown 10 minutes early. Quickly taxing we were able to take off 3 minutes before closing — taking a photo in case the FAA challenged our departure time later !

We only biked 25 miles,  a very small portion of the area on this trip.  The flight back was a great way to finish the day – flying at night, through the clouds into Montgomery.

The next time, I’ll plan a longer sojourn with a trip to explore the North Rim as well.  Bicycling offers such a wonderful way to explore our national treasures, combining it with my other love – flying, only makes it that much better! 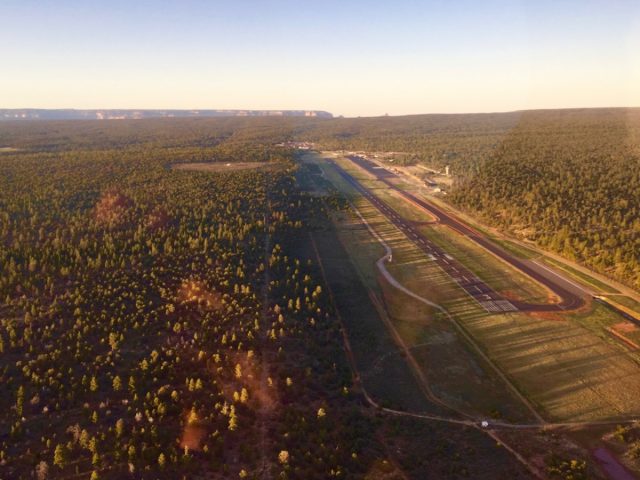