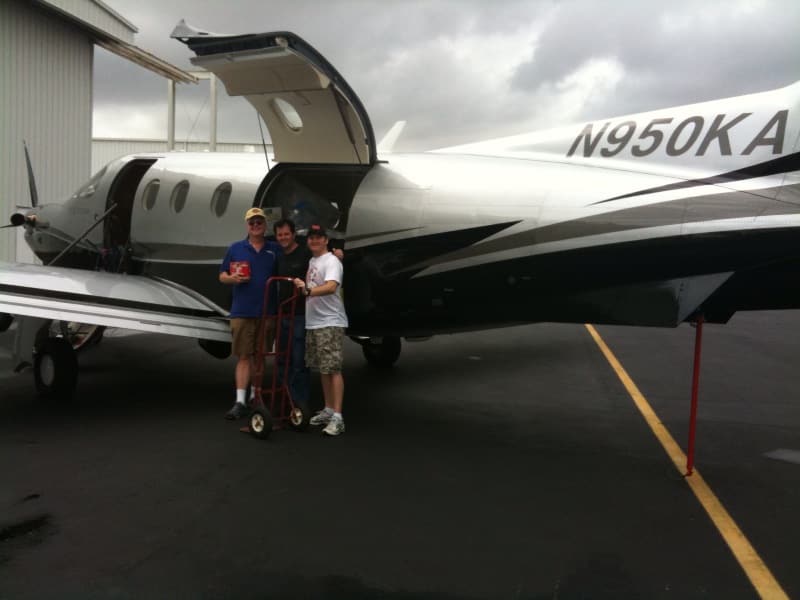 I’ve posted some lengthy recounts of my time in Haiti over the past week flying relief missions to Port au Prince, Jacmel and other areas of Haiti. You can read all the posts over on San Diego State University’s blog. Below are some excerpts from my entries, and thanks for all the support and words of encouragement, I’m trying my best to pass them along to the people of Haiti.

Some of the local people we are helping wanted us to visit their neighborhoods and families. We spent 2 hours walking the streets of Jacmel. The Haitians are resilient and are striving to have some semblance of normalcy amidst collapsed buildings still containing large number of their relatives and friends, and with very little to eat and virtually no shelter. One young man was singing a song about the earthquake on the top of a collapsed building that was the tomb for 20 of his family and friends. The multistory house was reduced to 6 or 7 feet in height. One hundred people may congregate when others are working to make meals, however there may only be enough for 40-50 of them to get a small portion. Read More

We stayed over night in the Turks and Caicos since we were so late leaving Haiti. I flew to Fort Lauderdale this morning to load up with a C-Arm X ray machine and 800 lbs of food, crutches, blankets and food. The X-ray machine will be left in Port Au Prince, then over the hills to Jacmel and Les Cayes, if we have time before darkness. Read More

One of the largest tent cities in Port au Prince
Brandon and I almost didn’t make it to Port Au Prince. Due to the disaster they have instituted a reservation slot process. Without an arrival slot, which you have to make within certain time limits, you can’t land at Port au Prince (airport code MTPP). No slots were available after many attempts, so I told the medical workers that I would deliver the equipment and ask for forgiveness later. You are not even allowed to leave Florida without a reservation. Just before departure I met a doctor who was returning and he said he could have helped many people if the equipment had been there earlier. Just before starting the engine, Rhonda (one of the relief workers) called and said we could have a slot reserved for someone else, however we had to be there in 2 hours. The flight takes 3 hours, however I hoped to increase the power and squeeze in. It was wishful thinking, however sometimes it is the thought that counts! Read More

After an hour flight, we were back in Jacmel. Many Haitians that we met earlier were there, along with the Canadian Disaster Relief team. One of our goals was to distribute some tents and food to our recent friends. Since we had many items not assigned, we started our own distribution to the people who have helped us and desperately needed help. We distributed clothes, tarps, tents, food and some medical supplies. One gentlemen approached me after noticing we had feminine hygiene products and asked if we could spare some for his young daughter. We had several boxes, so I gave him many of them and promised to bring more on our next trip. Such simple products that we take for granted, have such a profound impact for these people in need. Read More